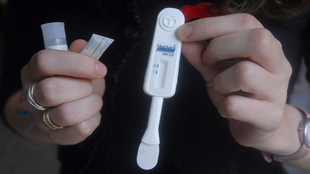 A pain-free, non-invasive saliva test is as accurate as a traditional blood test to diagnose infections of the human immunodeficiency virus (HIV), according to a new meta-analysis published yesterday (January 24) in The Lancet Infectious Diseases. The test could be a solution for countries that wish to adopt self-testing strategies for HIV.

Pooling data from five worldwide databases, an international team of researchers found that Oraquick HIV-1/2, a saliva test sold by Pennsylvania-based OraSure Technologies, is 99 percent accurate for HIV in high-risk populations and about 97 percent accurate in low-risk populations. The test requires a single swab of the gums, which is then inserted into a handheld device that produces results in 20 minutes. The Oraquick has been available to clinicians since 2004 and is being considered for use as an over-the-counter test in the United States and sub-Saharan countries, the paper noted.

Though the non-invasive test is attractive, it still has a “substantial” false-positive rate in low-risk populations, noted Chi Chiu Leung of the Department of Health in Hong Kong and Shui Shan Lee of the Chinese University of Hong Kong, in an accompanying comment in the Lancet. “This factor must be considered for test interpretation,” they wrote.