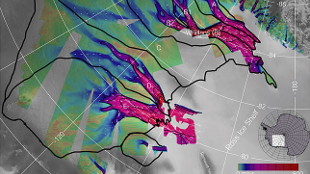 Western Antarctic ice streamsNASAA team of US-based researchers announced yesterday (January 28) that it has retrieved samples of liquid water and sediment from the Whillans Ice Stream, a subglacial lake buried under 800 meters of ice at the edge of the Western Antarctic Ice Sheet.

Having arrived at the site earlier month after a 1,000-kilometer trek the US-owned McMurdo research station, the Whillans Ice Stream Subglacial Access Research Drilling (WISSARD) team used a special environmentally clean hot-water drill to bore a 30-cm-wide hole in the ice. The untainted samples brought up are now being analyzed at a temporary lab onsite for evidence of microbial life. Some of the samples will be returned to the United States for further analysis in order to answer long-standing questions about Antarctica’s climate history and whether subglacial lakes stabilize or destabilize the Western Antarctic Ice Sheet, which appears to be losing mass at...

The breakthrough—the first retrieval of fully intact liquid samples from a subglacial lake—caps a busy period of Antarctic research, with three separate groups attempting to access some of the 300 or so subglacial lakes discovered on the continent over the past 20 years. In December last year, a British team abandoned efforts to access Lake Ellsworth due to technical problems. But earlier this year, Russian researchers announced that they had retrieved a core of frozen water from Lake Vostock, the largest of the Antarctic lakes, buried almost 4,000 meters beneath the ice.

Their results will add to findings published last November, showing that the super salty, oxygen-free waters of Antarctica’s Lake Vida, 27 meters below the ice, contain diverse a range of microbial life.