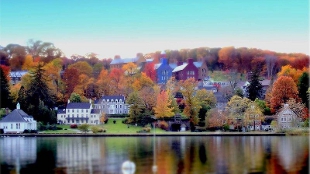 Cold Spring Harbor LaboratoryWikimedia, AdmOxalateLast week, we reported on the destruction at New York University’s Smilow Research Center on the eastern edge of Manhattan, which lost thousands of lab animals, biological samples, and reagents due to extensive flooding that killed the facility’s backup generators. Researchers at NYU’s main campus off Washington Square and at the Koch Cancer Research Center at Johns Hopkins University in Baltimore were also feeling the storms effects. Now, reports are coming in that Hurricane Sandy has also devastated a high-frequency radar network that measures ocean currents just offshore. According to ScienceInsider, 17 of the 28 radars in the network, which runs from Cape Hatteras, North Carolina, to Cape Cod, Massachusetts, were knocked out by the storm.

It's unclear what became of the 17 silent radar sites, physical oceanographer Scott Glenn of the Institute of Marine and Coastal Sciences at Rutgers University told...

But against the backdrop of devastation, stories of resilience are emerging. According to a sign posted at the entrance to Cold Spring Harbor Laboratory (CSHL) buildings on the North Shore of Long Island, ScienceInsider reported, science will prevail: "Sandy versus Science,” the sign reads—“Science Wins."

Thanks to eight diesel-powered generators—and extensive disaster planning—CSHL has continued to supply power to several of its buildings, despite the incoming tide that rose more than 2 meters higher than normal. In addition to keeping the research institute’s freezers and incubators running, the cafeteria has remained open, and CSHL is even hosting a scientific conference on cell nuclear receptors and disease, just a few days behind schedule.

Furthermore, the facility is serving as a refuge for the local community. Police, firefighters, and local families “saw the lights on at night,” and began showing up at the lab to enjoy some heat, Internet access, and even meals, CSHL President Bruce Stillman told ScienceInsider. And when they needed some gas, the lab’s employees hauled a generator to the local gas station to power it up long enough to pump gas. Before long, local residents started to show up to fill their tanks as well. “We think we can last rather indefinitely as long as we can get diesel,” Stillman said.

Correction (November 5, 2012): This story has been updated from its original version to correctly reflect that the the radars in the Atlantic network sit onshore, typically just behind the beach or up on a cliff, not offshore. The Scientist regrets the error.