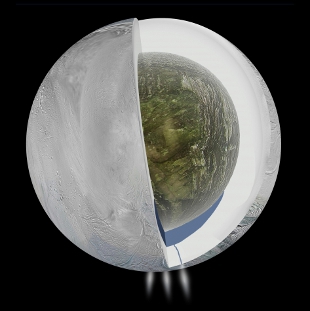 An artist's depiction of the possible interior of Saturn's moon Enceladus, with an ocean at its south pole beneath a think sheet of ice.NASA/JPL-CALTECHThe search for extraterrestrial life in the Solar System has been further focused by the confirmation that liquid water exists beneath the icy outer surface of Saturn’s tiny moon, Enceladus. With help from NASA’s Cassini spacecraft, which has been exploring Saturn and its moons since arriving there in 2004, researchers have mapped the gravitational field around the 300-mile-wide moon and found that a body of liquid water covering an area similar to that of Lake Superior lies beneath the ice at its south pole. They published their findings today (April 4) in Science.

“What we’ve done is put forth a strong case for an ocean,” study coauthor David Stevenson, a professor of planetary science at CalTech, told The New York Times.

Apparently, the gravitational forces that Enceladus experiences as it orbits Saturn and interacts with a neighboring moon, Dione, create friction and heat that melts some of its icy coat to produce liquid water.

Researchers had previously detected sodium and potassium salts on the moon and determined that methane and ammonia were present in the plumes of water vapor that occasionally spew from its south pole. Add liquid water to this mix, and Enceladus may be a good place to look for living organisms, according to Leicester University mathematician Nikolai Brilliantov, who wasn’t involved with the research. “There are definitely regions on Enceladus where the conditions are such that life could exist. You have liquid water, you have chemicals and you have heat. And that is enough for life,” Brilliantov, who in 2008 proposed the theory that a liquid ocean underlies the jets of water squirting from Enceladus, told The Guardian. “To my mind, this is the best place we can expect to find life elsewhere in the solar system.”