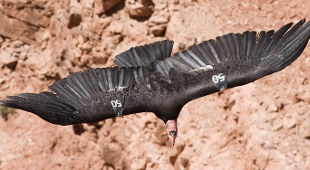 The majestic bird whose nearly 10-foot wingspan adorns California skies is constantly threatened despite a successful breeding program. The culprit is lead poisoning from the carcasses of animals shot with lead bullets, despite a ban on such ammunition near active breeding sites, according to recent study published this week (June 26) in Proceedings of the National Academies of Science.

“By any measure, the lead poisoning rates in condors are of epidemic proportions,” first author Myra Finkelstein, a toxicologist at the University of California at Santa Cruz, told Nature.

The captive breeding program has brought condor numbers up from 22 in 1982 to nearly 400 today, although half of those birds still reside in breeding centers. The study found even if most hunters are using copper or other bullet alternatives, it may not be enough. If as little 2...

“The science is solid and the conclusions inescapable—the condor will never be a free-living species as long as exposure to lead from ammunition continues,” raptor biologist Patrick Redig of the University of Minnesota, St. Paul, who was not involved in the study, told ScienceNOW.