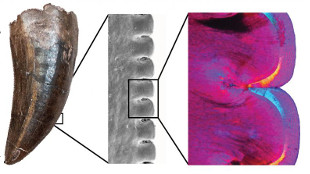 A closer look at fossilized teeth from carnivorous dinosaurs has revealed that what was once thought to be damage is actually a unique adaptation that likely contributed to the predators’ success. A study published yesterday (July 28) in Scientific Reports described microscopic serrated edges covering the surfaces of teeth from theropods including Tyrannosaurus rex and Allosaurus.

“This topic has not previously been examined with this level of detail. It shows how, at a microscopic level, the teeth are adapted for their job,” Paul Barrett, a paleobiologist at the Natural History Museum in London who was not involved in the study, told BBC News.

Researchers from the University of Toronto Mississauga and their colleagues analyzed sections of erupted and unerupted teeth from several theropods and concluded that the serrated edges, or denticles were present during tooth development. The structures may have helped theropods grasp and slice...

“In general, meat-eating animals have less complex teeth than plant eaters as plant matter has to be chewed and ground up,” coauthor Kristin Brink, a postdoctoral researcher at Toronto Mississauga, told BBC News. “It was surprising to find that theropods, which eat meat, had this complexity.”

The researchers also identified dentin structures at the bottom of each serration indent, Live Science reported. “It's really cool that such a small, little change in the tooth structure, a small arrangement of the dental tissues, could completely change the ways these animals are living,” Brink told Live Science.