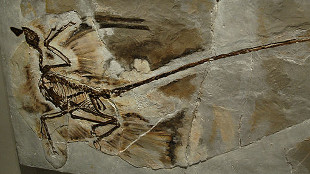 Over the last two decades, dozens of fossilized dinosaur remains bearing evidence of feathers or quill-like protofeathers have surfaced, most notably among ornithischians and coelurosaurian theropods. These discoveries led some researchers to propose that perhaps all dinosaur species bore some sort of feather or down covering. But an analysis of more than 80 fossilized dinosaur and Mesozoic bird skin samples published in Biology Letters yesterday (June 3) indicates that this is likely not the case.

“What we found from this analysis is that the first dinosaur was probably not feathered,” Nicolás Campione, a paleobiologist at Uppsala University in Sweden told The Guardian. “Feathers clearly evolved in the dinosaur lineage, but right now, the data do not point to a feathered ancestor for them all.”

Campione and his collaborators at the Natural History Museum in London and the Royal Ontario Museum in Toronto created a phylogenetic tree...

That feathers are preserved only under certain conditions has hindered researchers’ attempts to create a detailed timeline of when plumage arose. “We need very, very exceptional circumstances to get feathers preserved,” Jakob Vinther, a paleobiologist at the University of Bristol who was not involved in the study, told the Toronto Star.