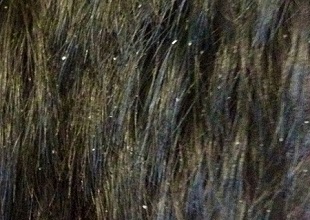 WIKIMEDIA, HMOCHOA95Dandruff affects about half of the postpubescent population, and previous studies have suggested that microbes living on the scalp are the main cause. Now, a team led by researchers at Shanghai Jiao Tong University, China, have found that the severity of dandruff is linked to the composition of those microbes—in particular, bacteria—offering potential opportunities for treatment. The findings were published today (May 12) in Scientific Reports.

Researchers have suggested a number of factors to explain the presence of dandruff, including the quantity of a natural oily substance called sebum secreted through a person’s skin, and the action of scalp-living Malassezia fungi that have been implicated in various forms of dermatitis. But sequencing the bacteria and fungi living in 174 scalp samples from 59 people with slight to moderate dandruff, the Shanghai researchers found that, in fact, the composition of bacterial species was more strongly associated with dandruff...

Based on the findings, the authors suggest that controlling the composition of microbes living on a person’s scalp could provide potential treatment solutions for the condition. “The relationship between the severity of dandruff and the bacteria suggested that adjusting the equilibrium of the bacteria, particularly by increasing the Propionibacterium and decreasing the Staphylococcus on the scalp, might be a novel way to lessen the severity of dandruff,” they wrote in their paper.