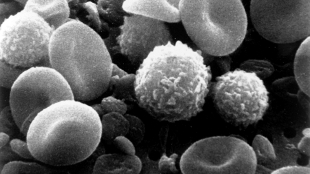 WIKIMEDIA, NATIONAL CANCER INSTITUTENature Medicine has retracted a paper that contained falsified data almost six months after doubts were raised about the research and the GlaxoSmithKline (GSK) employee who authored it. In June, GSK fired Jungwu Zang, who ran the company’s neurodegenerative disease research center in Shanghai, after irregularities turned up in the 2010 paper, which he coauthored with other GSK scientists and a researcher from the Baylor College of Medicine in Houston, Texas.

The paper detailed the role of the interleukin-7 receptor (IL-7R) and T-helper 17 (TH17) immune cells in multiple sclerosis and contained image of blood samples from healthy subjects and MS patients. One image, Figure 6, erroneously stated that it showed blood cells from MS patients at Baylor. From Nature Medicine’s retraction notice, which cited GSK’s own investigation into the irregularities: “The investigation established that the data depicted in Figure 6 and...

Though GSK suggested that the journal pull the paper back in June, Zang and first author Xuebin Liu refused to sign off on the retraction, stating that the mistake was unintentional and did not affect the paper’s overall conclusion that IL-7R plays a role in the overexpansion of TH17 cells, which contributes to MS progression. According to Retraction Watch, Zang finally agreed to the retraction along with the eight authors that initially signed off on the move. Liu and coauthor Stewart Leung declined to sign the retraction and continue to stand by the paper’s conclusions, while eight other coauthors either could not be reached or did not respond to the journal’s attempts to contact them regarding the retraction.

According to the blog Pharmalot, Zang has landed a chief scientific officer position at Simcere Pharmaceutical, in Nanjing, China, since the GSK scandal broke.