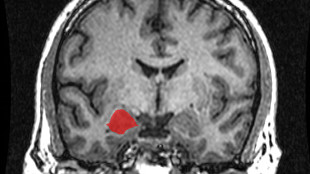 WIKIMEDIA, AMBER RIEDER, JENNA TRAYNOR, AND GEOFFREY B HALLThe almond-sized brain structure called the amygdala has been thought to be essential for experiencing fear. People with amygdala damage may go through life without feeling frightened by spiders, horror films, or even life-threatening trauma. But scientists have found a way to make three women with damaged amygdalae panic, Nature reported.

The researchers, who published their work in Nature Neuroscience on Sunday (February 3), came upon their discovery by surprise. For years, they had been studying a 44-year-old woman with Urbach-Wiethe disease, a genetic disorder that can cause skin problems and hardening of brain tissue. She had not reported feeling fear since childhood. But when the researchers had her breathe air with elevated levels of carbon dioxide gas—which causes no real danger, but can trigger a sensation of suffocation—she unexpectedly panicked.

The scientists then tested a pair of twins with amygdalae...

Interestingly, the three women experienced more panic than healthy volunteers, which do not always panic in response to the carbon dioxide test. The results of the experiment indicate that the amygdala is not essential for all fear responses. The researchers say that the amygdala may be more important for responding to outside threats, such as scary animals, and less necessary for processing internal fears, like the sensation of suffocation or a heart attack.

"This study adds to a growing body of work showing that there are different systems for responses to different kinds of threats,” neuroscientist Joseph LeDoux of New York University, who was not involved in the study, told Nature. “There is lots of evidence that the amygdala contributes to threat-evoked responses, but very little evidence that it generates the conscious experience of fear."