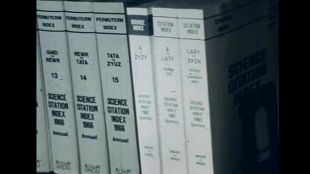 YOUTUBE, HOW TO USE THE SCIENCE CITATION INDEX - PART 2The Science Citation Index (SCI), a systematic accounting of scientific publications that appeared in hundreds of journals and the papers that cited them, debuted 50 years ago with a five-volume print edition indexing 613 journals and 1.4 million citations. The year was 1964, and the SCI was the brain-child of Eugene Garfield, a former New York City cab driver who had gotten a PhD in linguistics from the University of Pennsylvania in 1961 and launched the Institute for Scientific Information in 1955. Garfield would go on to found The Scientist in 1986.

Garfield is considered one of the founders of bibliometrics and scientometrics, and the first installment of the SCI was the embodiment of those practices, which would come to revolutionize how the impacts of scientific research were measured. “I had always visualized a time when scholars...

The SCI made scanning the scholarly literature, a key part of generating hypotheses and publishing results then, as it is today, much less laborious. Shortly after publishing the print volumes of the SCI, the data were put on magnetic tapes, and later on the Internet. In 1997, citation indexes that tracked publications in the social sciences and in the arts and humanities were combined with the SCI to make the Web of Science, which is now administered by Thomson Reuters. “Thomson Reuters citation indexing has been fueling the engine of scientific discovery for 50 years,” said CEO James Smith in the statement. “Connecting professional communities with trusted, contextualized information is at the heart of our business, and I look forward to the innovation fostered by future generations of Web of Science users.”