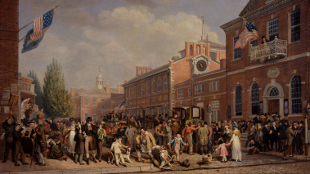 Detail of Election Day in Philadelphia (1815) by John Lewis KrimmelWikimedia, InnotataBy now everyone has heard about how Washington State and Colorado passed marijuana legalization measures, how four states voted for marriage equality, and how Barack Obama scored a decisive victory over challenger Mitt Romney to win 4 more years in the White House. But how did science do in Tuesday's national election? As it turns out, not too bad.

The number of physicists serving in the US House of Representatives doubled, from one to two, thanks to the reelection of New Jersey Democrat and plasma physicist Rush Holt and a win by particle physicist Bill Foster (Democrat) from Illinois. Foster apparently has fellow scientists to thank, in part, for his victory. According to ScienceInsider, Federal Election Commission records show that scientists from all over the country donated more than $400,000 to his campaign.

Though advocates of space science haven't been overly thrilled with President Obama's treatment of NASA, his reelection does represent the continuation of one goal—landing astronauts on an asteroid by 2025—that could have been in jeopardy of being cut by a Romney Administration.

In further marijuana news, Massachusetts joined 17 other states and the District of Columbia in legalizing medical marijuana. This prompted the Massachusetts Medical Society to call for increased research into the potential benefits of the drug, while advising the state's physicians to not prescribe marijuana to their patients quite yet. "We have asked the Drug Enforcement Administration to reclassify marijuana so that research and clinical trials can determine whether or not it has medical value," the society said in a statement. "Until its effectiveness is proven clinically and accepted by the [US Food and Drug Administration], we urge physicians to refrain from recommending it to their patients."