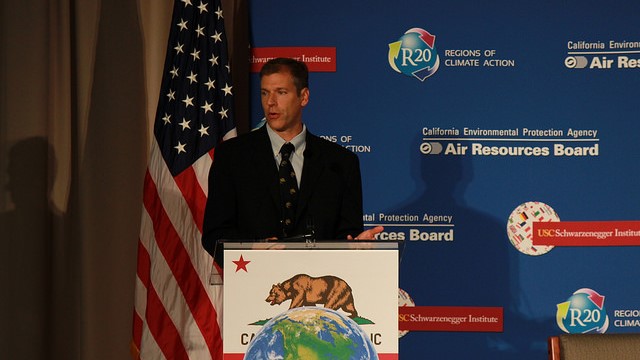 FLICKR, CALIFORNIA AIR RESOURCES BOARDDaniel Kammen, a science envoy to the US State Department, took to Twitter to announce his resignation today (August 23). In a page-long letter, the energy researcher at the University of California, Berkeley, criticized President Trump’s “attacks on core values of the United States,” becoming the latest scientist to resign from an advisory role to the Trump administration on partly ethical grounds.

“Acts and words matter,” Kammen writes in his letter. “To continue in my role under your administration would be inconsistent with the principles of the United States Oath of Allegiance to which I adhere.”

Citing the president’s response to events in Charlottesville and the administration’s decision to withdraw from the Paris Climate Accord, Kammen’s letter accuses Trump of harming “the quality of life in the United States, our standing abroad, and the sustainability of the planet.”

Like the resignation letter from members of the President’s Committee on the Arts and the Humanities last week, which spelled RESIST with the first letter of each paragraph, Kammen took the opportunity to send his own hidden message with each paragraph’s first letter: IMPEACH.

Andrew Rosenburg, head of the Center for Science and Democracy at the Union of Concerned Scientists in Cambridge, Massachussetts, tells Nature that Kammen’s situation reflects the ethical dilemmas that scientists involved with government face due to Trump’s policies.

“For the science envoys like Dan, where you are going and representing the United States, it’s particularly difficult,” he says. “It’s a personal struggle that everyone has to go through.”

Speaking to BuzzFeed News, Kammen takes a similar view. “I hated to do it, but I just can’t stand by,” he says. Referring to Trump’s rally in Arizona on Tuesday night, he adds, “I had been considering it when he announced that he would withdraw from the Paris Climate Agreement, but Charlottesville and last night’s speech were the last straw.”