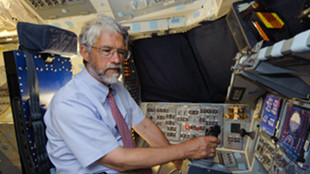 The President's science advisor John HoldrenNASA, PAUL E. ALERSAt a hearing held by the Committee on Science, Space and Technology earlier this week (April 17), congressmen and women discussed how the National Science Foundation (NSF) should spend its money, saying that the agency should focus on more practical research, ScienceInsider reported.

Committee leader Lamar Smith, a Republican representative from Texas, suggested that the NSF should ask those applying for grants to demonstrate how their research would benefit American citizens.

National Science Board Chair Dan Arvizu, who was at the hearing representing the NSF with the agency’s acting director, Cora Marrett, retorted that the agency already assesses intellectual merit and broader impacts of research and that applying Smith’s criteria could “compromise the integrity of the process.” “Are you saying that requiring the research to benefit Americans would be limiting?” said Smith, according to ScienceInsider.

Holdren defended current grant-reviewing practice. “The peer-review process is the backbone of our basic research enterprise, and we’ve done very well with it,” he said, according to ScienceInsider. “That doesn’t say it never makes a mistake. But I think it’s better than any alternative.” He went on to challenges politicians’ ability, including his own, to accurately judge the merits of basic research.

“I think it’s a dangerous thing for Congress, or anybody else, to be trying to specify in detail what types of fundamental research NSF should be funding,” Holdren said, according to ScienceInsider.