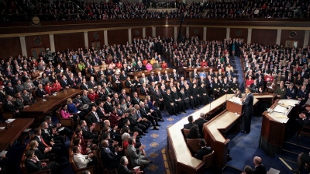 WIKIMEDIA, CHUCK KENNEDYIn a wide ranging State of the Union speech on Tuesday night (January 28), which ran the gamut from immigration reform and job creation to health care and national security, President Barack Obama mentioned the importance of basic research, though he did not unveil any new science policies on the horizon. Among the scientific topics broached by the President: climate change (“Climate change is a fact. And when our children’s children look us in the eye and ask if we did all we could to leave them a safer, more stable world, with new sources of energy, I want us to be able to say yes, we did.”), science funding (“Federally funded research helped lead to the ideas and inventions behind Google and smartphones. And that’s why Congress should undo the damage done by last year’s cuts to basic research so we can unleash the next great...

Obama has gotten somewhat mixed reviews from science advocates on his treatment of some topics in the annual speech. “Scientific and technological advances keep our nation internationally competitive and spur the innovation ecosystem fueling economic growth, but we have lost ground in recent years, due to research appropriations that have not kept pace with rising costs or international competition,” said Margaret Offerman, president of the Federation of American Societies for Experimental Biology (FASEB), in a statement. “We are thus grateful to President Obama for making research and innovation a national priority.” In a statement, the American Society for Biochemistry and Molecular Biology (ASBMB) also praised Obama for “reaffirming his administration’s commitment to support the nation’s scientific research and development capabilities.” But ASBMB also called on “the President and Congress to take the actions necessary to sustain American scientific enterprise.”