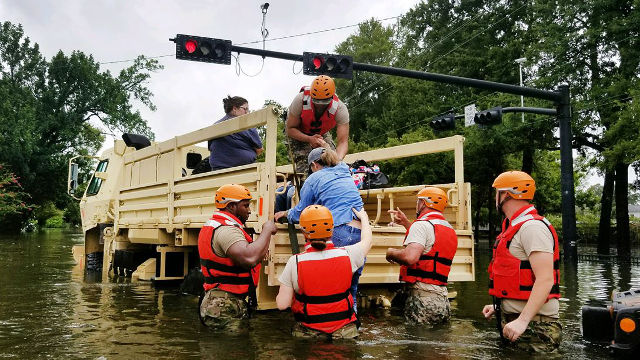 ARMY NATIONAL GUARD, PHOTO BY LT. ZACHARY WESTUpdate (September 8): Tim Mosca and others have extended the offer to those affected by approaching storms Irma and Jose, once again turning to Twitter to spread the word. The database now includes 296 labs that have signed on to help those in need.

Yesterday afternoon (August 28), Thomas Jefferson University neuroscientist Tim Mosca tweeted out an offer to help any researchers in Texas who’d been displaced by Tropical Storm Harvey, and encouraged other willing labs to retweet his offer. Dozens picked up on it, and within a day, the March for Science–Houston launched a database with contact information for those labs, along with a description of the type of research they do, indicating what accommodations might be available.

“It was born out of a conversation yesterday. A number of scientists on Twitter from Penn State, Princeton, and Utah and us...

Late last night, the March for Science–Houston contacted Mosca to launch the database, now 26 strong, including willing hosts from institutions across the U.S.

“I was ecstatic,” Mosca says. “I have a number of people who for some reason are interested in what I say on Twitter, but I knew that I’m a small fry . . . so I was very pleased we could widen the net a bit to find some more people who were willing to help.”

Mosca says he hasn’t gotten any requests for help just yet, and is not surprised by that. “People are focused on making sure they and their trainees are safe right now,” he says. “We’re expecting something more a little bit in the long term as people realize what the changes to their infrastructure are and what their needs are over the next weeks and months.”

If and when requests do come in, Mosca anticipates they will be primarily for help with storage and care of animal stocks. That’s why he recommended the March for Science–Houston include the type of facilities available at the willing labs as one of the columns in its database. “So that the fly people know where the fly people are, the fish people know where the fish people are, and that you can get something that’s more tailored to what you need.”

“I run a fruit fly laboratory so we’re more than happy to take care of people’s fruit fly stocks as long as they need,” Mosca says. “It’s the very least we can do for our colleagues.”