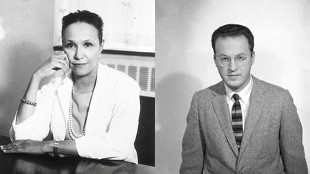 A native Manhattanite, Wright began her career working alongside her father, Louis Wright. At the cancer center at Harlem Hospital, which her father had started, they experimented with new chemotherapeutic drugs.

When her father died in 1952, Wright became the head of the cancer center, and a few years later she was appointed head of cancer research at the New York University Medical Center, where she helped develop a surgery-free system for delivering chemotherapeutic drugs deep into the body.

Wright also founded the American Society of Clinical Oncology (ASCO). She moved to New York Medical College as the associate dean and head of chemotherapy in 1967. “Not...

Wright has been heralded as a pathfinder in an era when a powerful African-American woman in medicine was rare. According to the NYT obituary, she told the New York Post in 1967, “Sure, a woman has to try twice as hard. But—racial prejudice? I’ve met very little of it.”

At the time, scientists using particle accelerators struggled to track the minute particles that were born from high-speed collisions. Glaser’s device works by tracking the paths of subatomic particles as they travel through a liquid, leaving a trail of bubbles behind. Previously, scientists had tracked the particles by making them travel through gas on the verge of condensation and looking at droplets in their wake, which was less effective.

“It was a very powerful technique,” Nicholas Samios, a physicist at Brookhaven National Laboratory, told NYT. “It was very instrumental in that period of physics.”

After winning the coveted prize, Glaser spent the second half of his career as a molecular biologist. He founded a biotechnology company, Cetus Corporation, where scientists eventually developed the polymerase chain reaction (PCR) as an important tool for amplifying DNA. He also became interested in studying how humans perceive motion.

“I think all his life he had the mind, the curiosity, the freshness of a kid,” Tomaso Poggio, an Massachusetts Institute of Technology neurobiologist who first met Glaser in the 1980s, told the University of California, Berkeley, press office. “He was fun. That is something I will really miss a lot.”