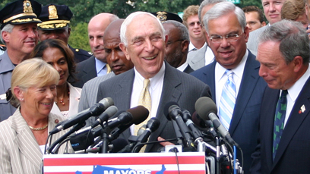 US Senator Frank Lautenberg (center) with NYC Mayor Michael Bloomberg (right) and Congreswoman Carolyn McCarthy (left)WIKIMEDIA, DARTH KALWEJTFrank Lautenberg (D-NJ), the oldest member of the Senate at age 89, died Monday (June 3) at New York-Presbyterian Hospital/Weill Cornell due to complications from viral pneumonia. He had also suffered from stomach cancer, and had already decided not to run for re-election next year.

His health and safety advocacy included crafting legislation that led to smoking bans on commercial flights, tougher drunk driving laws, and greater gun control. “Never was Sen. Lautenberg to be underestimated as an advocate for the causes that he believed in,” New Jersey Governor Chris Christie told the Los Angeles Times.

Lautenberg joined the Senate in 1982, served three terms, and retired in 2000. But he was re-elected 2 years later, after the Democratic incumbent, Robert Torricelli, withdrew from the race after illegal contributions to...

“[Lautenberg] improved the lives of countless Americans with his commitment to our nation’s health and safety, from improving our public transportation to protecting citizens from gun violence to ensuring that members of our military and their families get the care they deserve,” President Barack Obama said in a statement.

Lautenberg is survived by his wife, six children, and 13 grandchildren. Governor Christie, a Republican, must either appoint a replacement to serve out the remainder of Lautenberg’s term, which ends in January 2015, or hold a special election this November.