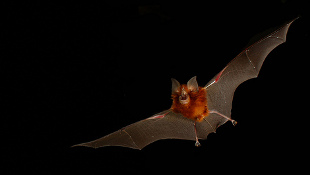 FLICKR, MICHAEL PENNAYBats are proposed to have been the natural reservoirs for the coronaviruses (CoV) underlying both the global outbreak of severe acute respiratory syndrome (SARS) in 2002–2003 and the ongoing outbreak of Middle East respiratory syndrome (MERS) that began in Saudi Arabia last year. Researchers from the Chinese Academy of Sciences and their colleagues presented in Nature this week (October 30) new evidence to support the idea that bats bridge the CoV transmission gap to humans.

Specifically, the team reports whole-genome sequences for two novel CoVs from Chinese horseshoe bats (Rhinolophidae), which were found to be “far more closely related to SARS-CoV than any previously identified bat coronaviruses, particularly in the receptor binding domain of the spike protein,” the researchers wrote. “[The results are] the strongest evidence to date that Chinese horseshoe bats are natural reservoirs of SARS-CoV.”

“It’s a major, major find and also one of the last remaining pieces of the puzzle after the SARS outbreak,” Vincent Munster, a virologist with the National Institutes of Health who was not involved with the study, told The Toronto Star.

In their paper, the researchers added that their results “also highlight the importance of pathogen-discovery programs targeting high-risk wildlife groups in emerging disease hotspots as a strategy for pandemic preparedness.”