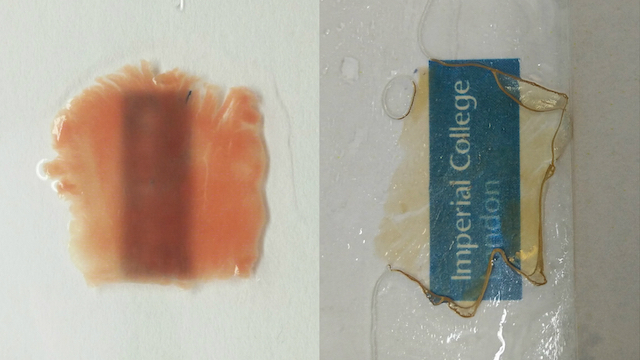 Tissue sample before (left) and after (right) treatmentFILLIPO PERBELLINIBy modifying CLARITY, an optical clearing technique first developed for brain tissue, to the heart, researchers at Imperial College London have created transparent cardiac tissue, according to a study published yesterday (July 12) in Scientific Reports.

CLARITY works by removing lipids from tissue, allowing light to penetrate. In recent years, researchers have applied this method various tissues, such as bone, and even to a whole mouse.

“Cardiac tissue is quite dense, using standard microscopy methods we are able to image the surface of the samples, about 20-30 microns from the surface,” coauthor Filippo Perbellin,...

Using this tool, the team was able to visualize networks of blood vessels as well as collagen localization and distribution.

“We have used a sample taken from human heart during heart transplantation, but we could do the same with tissue from a biopsy from a patient,” study coauthor Cesare Terracciano, a professor of cardiac electrophysiology at Imperial College London, says in the press release. “As a diagnostic tool, it would be able to us tell how fibrotic the tissue is, showing the changes in structure of a failing human heart and how this disrupts it from beating as the heart becomes less elastic.”