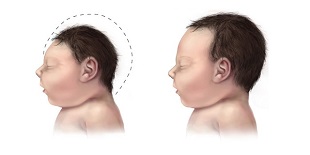 A baby with microcephaly (left) compared to a baby with a typical-sized head (right)WIKIMEDIA, CDCAn analysis published this week (May 25) in The New England Journal of Medicine has quantified the estimated risk of microcephaly in the developing fetuses of pregnant women infected with Zika virus. Using data from the Zika-hit state of Bahia in Brazil, researchers estimated the risk of microcephaly when mothers were infected during the first trimester of pregnancy to be between 1 percent and 13 percent.

“It is an appreciable risk,” study coauthor Michael Johansson of the US Centers for Disease Control and Prevention (CDC) told The Washington Post. “We need to do whatever we can to help women avoid Zika virus infections during pregnancy.”

In April, the CDC declared that sufficient evidence had accumulated to support a causal link between Zika virus infection and microcephaly and other birth defects; a study...

This estimate is the result of an analysis of Zika virus infection rate and reports of microcephaly cases among infants born between summer 2015 and February of this year. The CDC-led team reported a 1 percent to 13 percent risk of microcephaly in fetuses whose mothers were infected during their first trimester (a range reflecting uncertainty about the accuracy of both Zika and microcephaly diagnoses). Infection during the second and third trimesters showed a “negligible association” with microcephaly, the researchers wrote in their report.

The authors concluded that this association could yet become apparent in other areas where Zika is being transmitted, and argue for “precautions to avoid [Zika] infection during pregnancy” and for “health care systems to prepare for an increased burden of adverse pregnancy outcomes in the coming years.”

Christina Chambers of the Center for Promotion of Maternal Health and Infant Development at the University of California, San Diego, told STAT News that although the analysis was “thoughtful,” the estimates of microcephaly risk were based on some assumptions—such as that all women are equally susceptible to Zika infection—that are yet to be tested.

“Clearly infection in any trimester seems to be associated with microcephaly so as they conclude, should be avoided,” Chambers wrote in an email to STAT. “It might make sense that first trimester carries the greatest risk but [that] remains to be seen as we get more individual level data.”