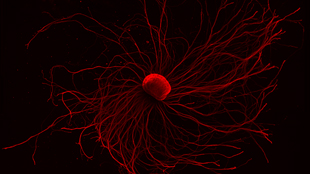 Photomicrograph of axons sprouting out of mouse embryo retinal neurons that were cultured in a Petri dish.Anna Guzik-Kornacka, University of Zurich

The human brain has about 100 billion neurons, with more than 100 trillion connections, or synapses, among them. A long-term goal of neuroscience research is to create a wiring diagram of each of the brain’s neurons and its connections. Knowing all of the connections could enable a greater understanding of the function of the various types of neurons, as well as of individual brain areas. Scientists at the Massachusetts Institute of Technology (MIT) and the Max Planck Institute for Medical Research have taken an important step toward this goal by creating a complete neural wiring diagram of a small piece of the mouse retina. Their findings were published today (August 7) in Nature.

“It’s the complete reconstruction of all the neurons inside this [area],” said study coauthor...

The researchers used an innovative imaging technique called serial block-face scanning electron microscopy developed by the study’s senior author, Winfried Denk, a neuroscientist at Max Planck. The technique involves slicing 25-nanometer-thick sections of tissue off a chunk of the retina and imaging them one at a time. In total, the researchers imaged 3,200 such sections from a 200-micrometer by 300-micrometer portion of the mouse retina called the inner plexiform layer—a processing structure sandwiched between photoreceptors, which receive visual input, and ganglion cells, which send out visual information to the brain.

The retina sections were then reconstructed into a complete three-dimensional wiring diagram of the 950 neurons in the tissue sample. First, 225 German undergraduate students spent 2 years, and a total of 20,000 hours, tracing skeleton structures of every neuron. Then, using a computer algorithm developed by Seung, the team analyzed the images and filled out the fine details of the skeletons.

With the fleshed-out wiring diagram in hand, the researchers were then able to classify each of the neurons into five basic types: the aforementioned photoreceptors and ganglion cells, as well as horizontal cells, bipolar cells, and amacrine cells. The exhaustive survey uncovered a new type of bipolar cell, though its function remains unknown. The analysis of neural connections also suggests that a particular type of ganglion cell is motion-sensitive.

“We haven’t completed the project of classifying types, but this shows that it should be possible,” said Seung in the statement. “This method should be able to do it, in principle, if it’s scaled up to a larger piece of tissue.”

Seung is now working on mapping a larger section of retina—0.3 millimeter by 0.3 millimeter. He plans to first analyze the electron microscopy images of the section with his computer algorithm, then have human volunteers check over the computer’s work through a crowdsourced project called EyeWire.