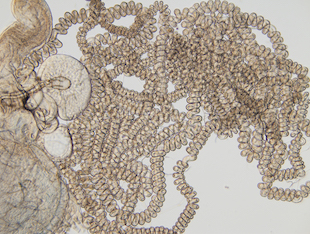 Sperm-storage organ of a female Drosophila bifurcaSCOTT PITNICKWhen it comes to reproduction, conventional wisdom has long said: sperm are plentiful and cheap, but eggs are rare and expensive. But the fruit fly Drosophila bifurca produces sperm that are 2.4 inches long, or nearly 20 times the male insect’s body size. (As The Atlantic noted: “If a man produced sperm that big, it would stretch diagonally across a basketball court.”) It turns out, longer sperm from many males compete to fertilize the female’s eggs by a form of post-copulatory sexual selection, Scott Pitnick of Syracuse University in New York and colleagues reported yesterday (May 25) in Nature.

To solve the mystery of why the flies’ sperm are so enormous, Pitnick and colleagues analyzed the shapes of male ornaments in other animals, including deer antlers, beetle horns, and peacock feathers. All of these pale in comparison with the D....

By analyzing the evolution of this sperm and the female fly’s labyrinthine reproductive tract (which, in D. bifurca, is more than three inches long), Pitnick’s team was able to show that the female organ evolved to favor longer sperm—making it a form of sexual selection, even though the female has no real “choice.” Since the females of this species mate with many males, those who produce the most of these giant sperm have the highest fitness.

“The females are all mating like gangbusters, but only a really high-quality male can capitalize on that,” Pitnick told The Washington Post.

“The biology is so very different and there has been no good explanation or even attempt to explain it,” Tim Karr, a visiting scholar at Kyoto Institute of Technology in Japan who was not involved in the study, told NPR’s Shots. “I think [this paper] will spark an awful lot of conversation and hopefully additional research.”