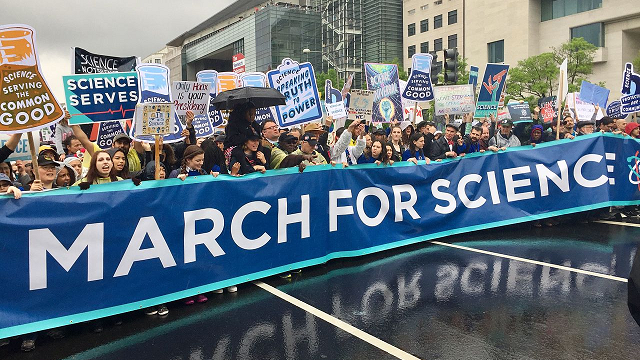 The marches are partly inspired by April’s March for Science, which saw protesters stage demonstrations around the world.WIKIMEDIA, BECKER1999

Scientists are preparing for demonstrations in more than 30 cities across India on Wednesday (August 9). The protests, seen as a follow-up to global March for Science demonstrations that took place on April 22, will aim to draw attention to funding shortages and anti-science sentiment, organizers say.

“Science in India is facing the danger of being eclipsed by a rising wave of unscientific beliefs and religious bigotry, and scientific research is suffering serious setback due to dwindling governmental support,” reads a statement from the Indian non-profit Breakthrough Science Society, which is helping organize the marches. “We appeal to scientists, researchers, teachers, students, as well as all concerned citizens to organize ‘India March for Science’ events throughout the country.”

Among protesters’ demands is a call to “stop propagation of unscientific, obscurantist...

Government officials have already disputed the movement’s foundations. “Their position is factually incorrect,” Ashutosh Sharma, secretary of the central government’s Department of Science and Technology, tells Science, adding that funding for research has in fact increased. “In the past 3 years, our budget has nearly doubled compared to earlier periods for both basic and applied research.”

This opposition hasn’t dampened enthusiasm for the marches, however. “Requests are pouring in to organise marches in other cities (even small towns) as well,” Soumitro Banerjee of the Indian Institute of Science Education and Research, Kolkata, told Tribune India last week. “In each of these places, committees of scientists are being formed to decide the specifics of each march.”