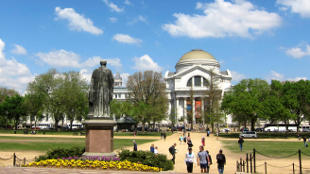 The Smithsonian's National Museum of Natural History in Washington, D.C.WIKIMEDIA, AGNOSTICPREACHERSKIDNatural history museums and similar institutions should stop taking donations and accepting sponsorships from “the fossil fuel industry and funders of climate science obfuscation,” according to a March 24 open letter signed by dozens of climate researchers and biologists. The letter, posted by the online and travelling exhibitor called The Natural History Museum, expresses the concern that institutions such as the American Museum of Natural History (AMNH) and the Smithsonian’s National Museum of Natural History are compromising their integrity through their associations with “special interests who obfuscate climate science, fight environmental regulation, oppose clean energy legislation, and seek to ease limits on industrial pollution,” the authors wrote.

The letter doesn’t mention any specific fossil fuel companies by name, but it does mention David Koch, an oil and manufacturing magnate who donates large sums of money to the political...

Michael Mann, a Penn State climate scientist who signed the letter, told The New York Times that donors like Koch misuse sponsorship of scientific institutions. “Cloaked in the garb of civic-mindedness, they launder their image while simultaneously and covertly influencing the content offered by those institutions,” Mann said.=

Another website, kickkochofftheboard.com (organized in part by The Natural History Museum), launched a petition today (March 24) urging the Smithsonian National Museum of Natural History and the AMNH to remove David Koch from their boards. As of this posting, the petition has attracted more than 42,000 signatures.