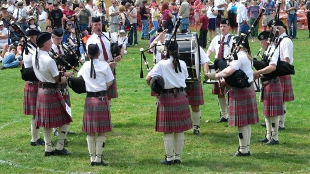 Scotland contains an unexpected amount of human genetic diversity, according to a new study of the country's inhabitants. The project, called "Scotland's DNA," found 150 different genetic lines of female ancestry from Europe, Asia, and Africa and 100 different groups of male ancestry from Europe and beyond. For example, more than one percent of Scottish men are direct descendants of the Saharan Berber and Tuareg tribes, which belong to a lineage that researchers have determined to be about 5,600 years old.

Edinburgh University geneticist Jim Wilson and St Andrews University historian Alistair Moffat probed the DNA of nearly 1,000 Scots to uncover the surprising results, a possible explanation for which could be the country’s location. "Perhaps geography, Scotland's place at the farthest northwestern end of the European peninsula, is the reason for great diversity," the pair said in a statement quoted by...

Scotland's DNA project will soon morph into Britain's DNA, an effort that will sample DNA from English, Welsh, and Irish inhabitants of the British Isles.