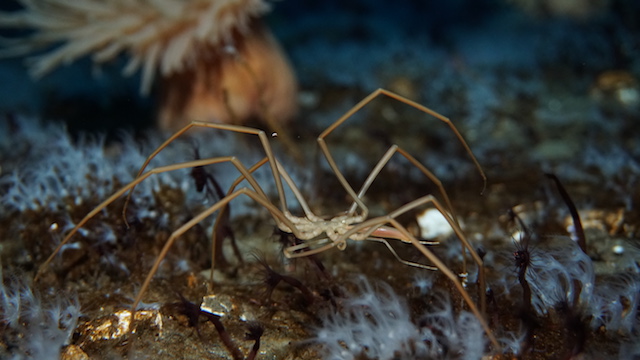 Sea spiders, which range in size from around a millimetre long to the size of a large dinner plate, have relatively tiny torsos and six pairs of long, lanky legs. For these creatures, legs are for more than getting around—they also contain their gonads and guts that branch down each of their limbs. “They have to do most of their business in their legs,” study coauthor Amy Moran, a marine ecologist at the University of Hawaii at Manoa, tells The Atlantic.

“Unlike us, with our centrally located guts that are all confined to a single body cavity, the guts of sea spiders branch multiple times and sections of gut tube go down to the end of every leg,”...

Wood and his colleagues made this discovery while examining giant, plate-size sea spiders in Antarctica. To assess how these arthropods moved oxygen through their bodies, the team injected fluorescent chemicals into their blood. The researchers observed that the creatures’ hearts beat weakly, while strong peristaltic contractions appeared in their guts.

When the researchers lowered oxygen levels in surrounding water, the sea spiders’ gut contractions became faster. “It’s like when you take a person up to altitude and they breathe faster and their heart rate goes up,” Moran tells The Atlantic. The sea spiders “are using their legs as gills and their guts as hearts.”

This is the first time scientists have observed this type of gut-based circulatory system. “It’s super cool. They can exchange gases much more efficiently this way,” Sebastian Kvist, an invertebrate ecologist at the Royal Ontario Museum in Toronto who was not involved in this study, tells National Geographic. “I’m curious to know what other marine animals do this that we don’t know about.”