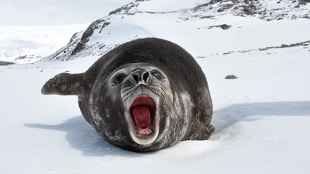 WIKIMEDIA, BUTTERFLY VOYAGESWith a little help from sensor-toting Antarctic elephant seals, researchers have pinpointed a fourth known source of the deep-ocean streams of cold water that circulate around the globe and thus help to regulate the Earth’s climate, according to a study published this week (February 24) in Nature Geoscience.

Until now, scientists knew of only three sources of Antarctic bottom water, which sinks to the depths because it’s denser than typical seawater and gradually moves off in slow-moving currents—all of them off the coast of Antarctica. But they had long suspected the existence of more sources, and some had hypothesized that undiscovered sources may be found in polynya—areas of open water near sea ice. These areas do not freeze because strong winds and currents keep freshly formed ice moving.

To test the idea, oceanographers at Hokkaido University in Sapporo, Japan, used satellite imagery to find polynya where...

Unlike previously identified sources, the researchers found that bottom water production at the Cape Darnley polynya is driven primarily by the flux of salt released by sea-ice formation, which makes the water denser. The authors estimated that the resulting Cape Darnley water mass accounts for 6 to 13 percent of the total bottom water circulating around the globe, though more bottom water sources remain to be found elsewhere.

Richard Alley, a geophysicist at Pennsylvania State University who was not part of the study, told Nature that the discovery of the Cape Darnley source fills a gap in our understanding of the Southern Ocean’s role in global climate, “including carbon dioxide, temperature, the stability of the Antarctic ice sheet, and changes in sea level.”