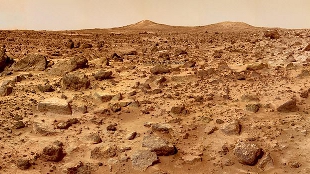 The Twin Peaks at the southwest of the Mars Pathfinder landing site. Wikimedia, NASA/JPL J. Craig Venter and Jonathan Rothberg, two widely known geneticists, both hope to send a DNA sequencing machine to Mars that will be able to prove once-and-for-all whether life exists on the Red Planet.

"There will be DNA life forms there," Venter predicted last week (October 16) at the Wired Health Conference in New York, Technology Review reported. (Hear his comments in this video, starting at 00:11:01.)

Venter said that a collaboration between the J. Craig Venter Institute and his company, Synthetic Genomics, is developing the machine for the task and is doing test runs in the Mojave Desert. Eventually, the machine should be able to gather soil samples and isolate microbes, then sequence their DNA, and send the data back home to Earth.

NASA isn’t scheduled to send another rover to the Red Planet until 2018 at the earliest, however, and even then, it's not certain that a DNA sequencing device would be along for the ride. But the argument for sending the machine to Mars, as opposed to just bringing home some soil samples, is contamination. If the samples are brought home and then analyzed, "no one would believe you," Tessi Kanavarioti, a chemist and Martian biologist, told Tech Review.

As for who will be the one to build the first Martian sequencer, only time will tell. "The hard thing about getting to Mars is hitting the NASA specifications," Harvard University’s George Church, a senior member of the Harvard-MIT team, told Tech Review. "[Venter] isn't ahead of anyone else."