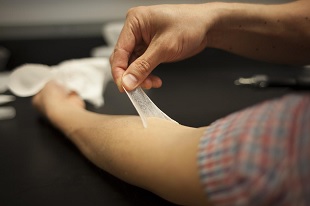 As skin ages, it gradually loses its collagen (an extracellular matrix protein providing strength and structure), causing skin to sag and become wrinkle prone. A team led by researchers at MIT and Harvard University has now developed a topically applied, polymer-based material that—according to their study published earlier this week (May 9) in Nature Materials—could cover up wrinkles and blemishes by mimicking “the properties of normal, youthful skin,” the authors wrote.

“Developing a second skin that is invisible, comfortable, and effective in holding in water and potentially other materials presents many different challenges,” study coauthor Robert Langer, a leader in regenerative medicine and drug delivery at MIT, told reporters (via BBC News). “We are extremely excited about the opportunities that are presented as a result of this work and look forward to further developing these materials to better treat patients who suffer from...

The material, which the researchers have named “second skin,” is made of silicon and oxygen compounds called siloxanes that link up to form polymers in a thin, skin-like layer which, while removable, can stay intact for at least 24 hours. The layer is formed by applying two creams in succession: first, a cream containing the siloxanes; second, a cream containing a platinum catalyst that causes polymer cross-linking and consequently hardening of the material.

Langer and colleagues reported tests of the material’s performance in several pilot studies, including one on adult participants who had applied the second skin under their eyes. The team showed that wearing the material not only reduced the appearance of bags and wrinkles, but also made skin under the eyes quicker to return to its normal shape after being stretched or pinched.

“I think it is brilliant,” Columbia University’s Gordana Vunjak-Novakovic, who was not involved in the research, told The New York Times. “What they have done is design a clever biomaterial that recapitulates the properties of young and healthy skin. They can use it as sort of a Band-Aid over old and aging skin and get very significant results.”

The material’s potential applications are not only cosmetic. Study coauthor Barbara Gilchrest told The Washington Post the material could also be used to help other topical creams and medical ointments stay on the skin, as current treatments for eczema or psoriasis, for example, rub off on patients’ clothing or bedsheets. “Having something that would be practical and stay on and be acceptable to patients as a way of delivering more medication where it’s needed could open up a whole area in which we could provide more effective, more practical, more pleasant treatments,” she said.