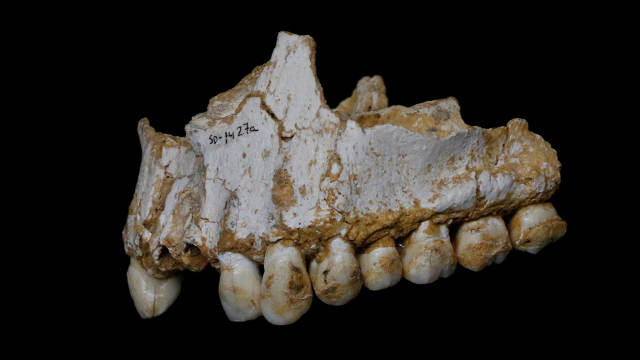 Upper jaw of a Neanderthal from El Sidron in norther Spain. Analysis of a dental calculus deposit (visible on the rear molar) suggests the individual ate poplar, a source of aspirin, and Penicillium fungus, which produces the antibiotic penicillin.PALEOANTHROPOLOGY GROUP MNCN-CSICDNA extracted from the hardened tooth plaque of five Neanderthals living in the El Sidrón Cave in northern Spain some 50,000 years ago has revealed a plant-based diet of mushrooms, pine nuts, and moss, in contrast to the meat-based diets of Neanderthals to the north in Belgium, according to a study published this week (March 8) in Nature. The analysis also reconstructed the hominins’ oral microbiome, and identified a parasite that suggests the species may have shared microbes with human ancestors via kissing.

“It really paints a different picture, almost of their personalities, of really who they were,” coauthor Laura Weyrich, a palaeomicrobiologist at the University of...

The researchers identified more than 200 different species of microbes presumed to be living in the Neanderthals’ mouths. And in one individual, the team found the gastrointestinal pathogen Microsporidia and what appeared to be a tooth abscess. The same individual also harbored DNA from poplar trees, the bark of which contains salicylic acid, a natural source of aspirin, and Penicillium mold, which produced penicillin, raising the possibility that he had been self-medicating with these natural products. “It’s pretty phenomenal that these guys were so in tune with their environment and to know what was going on and how to treat things,” Weyrich told NPR.

The presence of DNA from a microbe that causes gum disease in modern humans hints at the fact that Neanderthals and human ancestors not only interbred, as previous genetic studies have suggested, but may have also kissed, or at least shared food, Weyrich added. “A lot of these breeding interactions had been thought to be rough interactions, something that wouldn’t be sensual or enjoyable,” she told NPR. But based on the new evidence, “we really think that those interactions were probably more friendly, and much more intimate, than what anyone ever imagined before.”

“It’s a very exciting paper,” Jean-Jacques Hublin, a researcher at the Max Planck Institute for Evolutionary Anthropology who was not involved in the new study, told NPR. “It opens a new window into the past, a new way to investigate [the] life and behavior of Neanderthals.”