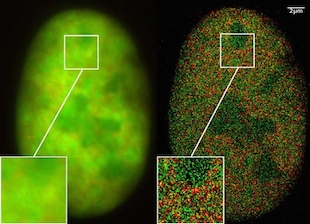 WIKIMEDIA, CRISTOPH CREMER VIA ANDY NESTLSeveral teams reported on insights gleaned from live-cell images obtained through the use of super-resolution microscopy at this week’s American Society for Cell Biology (ASCB) annual meeting held in Philadelphia.

During a session devoted to the technology, Sinem Saka from University Medical Center Göttingen in Germany described her team’s use of stimulated emission depletion (STED) microscopy, among other approaches, to ascertain patterns of proteins within the plasma membrane. Yale University School of Medicine’s Fang Huang discussed how he and his colleagues are applying a multiple-emitter fitting algorithm to localize molecules within live cells faster than previously possible. And Wesley Legant of the Howard Hughes Medical Institute’s Janelia Farm Research Campus in Ashburn, Virginia, described how he and his colleagues are using lattice light sheet microscopy to produce multicolor images to track multiple organelles throughout cell division.

“The best way to study cells is actually [in] as close as we can get to their native environments,” Legant said at ASCB on Monday (December 8).

Advances in super-resolution microscopy have garnered significant attention during the last few years. And in October, Legant’s advisor, Eric Betzig, was announced a winner of this year’s Nobel Prize in Chemistry, along with co-laureates Stefan Hell and William Moerner. The Nobel Foundation recognized the three researchers for their achievements enabling scientists to “study living cells in the tiniest molecular detail,” the organization noted.