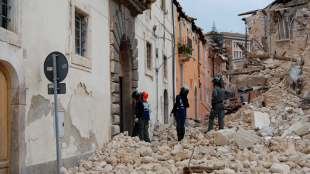 WIKIMEDIA, ENPASEDECENTRALEIn April, 2009, a 6.3-magnitude earthquake shook L’Aquila, Italy, killing several hundred residents. The week prior, a team of government seismologists reassured the community that a series of small shakes were nothing to worry about, and a court later held them responsible for the lack of alarm and the subsequent fatalities. This week, an appeals court overturned the ruling for the six seismologists.

“I am relieved, but I can't say I'm happy,” acquitted volcanologist Franco Barberi told ScienceInsider. “I am embittered but relieved.”

The judges retained the sentencing for one man, Bernardo De Bernardinis, the former head of Italy’s Civil Protection Department, who will serve two years in prison. According to ScienceInsider, “In their verdict today [November 10], a panel of three judges headed by Fabrizia Francabandera told the court that only in De Bernardinis’s case could a link be proven between the expert’s words...

The initial conviction of the seismologists caused an outcry among the geological and broader science communities. While this latest decision may be a relief for those acquitted, prosecutors may make their own appeal.