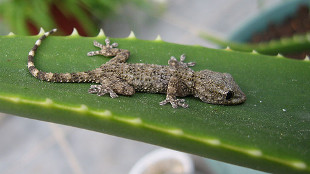 Geckos living in areas with little rain but lots of humidity maintain dry skin with microscopic hairs that corral water drops and expel them from the surface, according to a study published this week (March 11) in the Journal of the Royal Society Interface.

Researchers from the University of the Sunshine Coast, James Cook University, the University of Queensland in Australia, and the University of Oxford examined the skin of ground-dwelling box-patterned geckos (Lucasium steindachneri) under a scanning electron microscope. The scientists found that the skin was covered in densely packed spiny hairs, each a few micrometers in length, which had also been previously identified in other gecko species. By trapping pockets of air, the spines force water on the skin’s surface to remain as spherical droplets rather than spreading in an even layer over the reptile’s scales. Water droplets the size of a crayon’s...

Next, the scientists analyzed slow-motion videos to examine how the spiny scales repelled water. The skin’s structure encourages the water drops to merge, creating a larger drop that eventually falls off the skin due to gravity, wind, or being hit with a smaller falling droplet that drives it from the surface at high speed, the researchers found. The narrow spines, of which thousands would fit in the width of a human hair, contribute to the phenomenon the authors dubbed “geckovescence,” in which merging drops convert the energy associated with their shrinking surface area into kinetic energy that sends them flying off the animal’s skin.

Getting rid of water droplets that could host pathogenic bacteria and fungi may help the geckos prevent disease, the authors wrote in their paper. The discovery could inform the development of self-drying surfaces. “We are now focusing on other interesting properties of the skin nanostructuring which, combined with the jumping droplets phenomena, may find applications in the health and other materials industries,” study coauthor Jolanta Watson of the University of the Sunshine Coast told New Scientist.