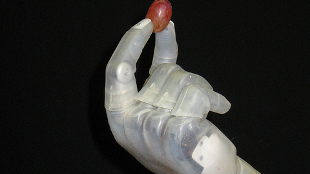 Flickr, MilitaryHealthResearchers at Stanford University in California have created a flexible, pressure-sensitive, and self-healing polymer that could find use as an “electronic skin” for robots and biomimetic prostheses, according to a report out this week (November 11) in Nature Nanotechnology.

Materials scientists have been developing “epidermal electronics” for the past 10 years. They have produced circuits thin and flexible enough to be attached to skin, and sensitive enough to record heartbeats and brain activity, for example. At the same time, chemists have been working on self-healing polymers—plastics that can be activated by heat, light, or gentle contact to repair themselves after breakage.

Now, a team at Stanford has combined these two properties by incorporating nickel atoms into a self-healing polymer. The resulting material is sensitive to applied forces such as pressure or twisting because these forces alter the distance between the nickel atoms, which affects how easy it...

To show how well the electrical and mechanical properties could be restored after damage, the researchers sliced through the polymer with a scalpel. After they held the cut edges together for 15 seconds, electrical conductivity was restored with around 90 percent efficiency. After ten minutes, the break was fully repaired the material was once again flexible.

“I think it's kind of a breakthrough,” John Boland of the Center for Research on Adaptive Nanostructures and Nanodevices (CRANN) at Trinity College Dublin, who was not involved in the study, told ScienceNOW. “It's the first time that we've seen this combination of both mechanical and electrical self-healing.” But Boland also raised an interesting caveat. Scalpel wounds are very neat, he pointed out, and do not cause much mechanical deformation around the cut itself. If the material was torn and stretched, on the other hand, the scarring may prevent self-healing.

(Read about other efforts to lend a sense of touch to prosthetic limbs in The Scientist’s recent feature, “Missing Touch.”)