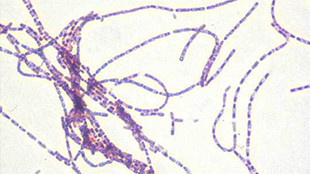 WIKIMEDIA, U.S. ARMY MEDICAL RESEARCH INSTITUTE OF INFECTIOUS DISEASESProminent Washington consultant Richard J. Danzig encouraged the U.S. government to invest in anti-anthrax drugs while reaping profits from a company that sold those same products, The Los Angeles Times reported Sunday (May 19). The company, Human Genome Sciences, made $334 million selling the anthrax antitoxin raxibacumab to its sole customer, the federal government, at $5,100 per dose. Human Genome Sciences paid Danzig at least $1 million in director's fees and stocks between 2001 and 2012.

Danzig became a director of Human Genome Sciences in May 2001. Later that year the company began work on an anthrax antitoxin after the September 11 terrorist attacks and a spate of anthrax-laced letters being mailed to government officials and media organizations. Danzig warned government defense officials in invitation-only seminars that terrorists could engineer the anthrax bacterium to be drug-resistant. He eventually urged officials...

Many defense officials were surprised to hear of Danzig’s affiliations when informed by The Times. "Holy smoke—that was a horrible conflict of interest," said Philip K. Russell, a government biodefense official during the Bush administration who attended seminars given by Danzig.

Danzig said that he thought he had done nothing wrong, noting his position on forms when asked and sometimes volunteering it in conversation. "If I thought any of it posed a potential conflict that might cause somebody who knew about it to discount my views, I would tell them," he told The Times.

GlaxoSmithKline bought Human Genome Sciences in August of 2012. Raxibacumab degrades while in storage, and the government’s most recent order should expire by 2015.