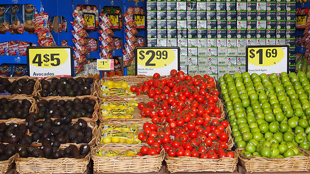 Not sure if that avocado needs one more day to ripen? A new device, developed by chemists at the Massachusetts Institute of Technology, can accurately measure the ripeness of several types of fruit by detecting the presence of ethylene, a gas that promotes ripening in plants. The sensor could help supermarkets avoid the roughly 10 percent of their fruits and vegetables they lose every year to spoilage, said MIT’s Timothy Swager.

The sensor, described April 19 in the journal Angewandte Chemie, is made of an array of tens of thousands of carbon nanotubes modified with copper atoms, which bind ethylene and allow scientists to measure the amount of gas present. The researchers successfully tested their sensors on bananas, avocados, apples, pears, and oranges, accurately determining their ripeness.

The inexpensive devices could someday be attached to cardboard boxes of produce and scanned with a handheld device to...

The sensors, which cost just 25 cents, could reduce fruit spoilage during the international shipping process. “At any given time, there are thousands of cargo containers on the seas, transporting fruit and hoping that they arrive at their destination with the correct degree of ripeness,” John Saffell, technical director of sensor-making company Alphasense, who was not involved in the research, said in a press release. “Expensive analytical systems can monitor ethylene generation, but in the cost-sensitive shipping business, they are not economically viable for most of shipped fruit.”