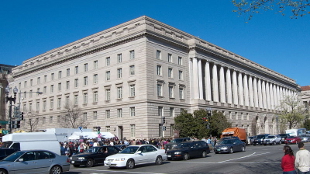 The IRS building in Washington, DC, was closed in 2006 due to heavy floooding.Wikimedia, IRSRising sea levels linked to global warming will likely cause billions of dollars worth of flood damage to property and infrastructure in Washington, DC, within the next 50 years, according a study out last week (28 October) in the journal Risk Analysis. The warning bears a striking resemblance to a 2009 report from the New York City Panel on Climate Change (NPCC), which predicted a scenario eerily similar to the one that played out last week as super storm Sandy rolled through the Big Apple.

To estimate damage to the US capital, researchers from the University of Maryland used Geographic Information Systems (GIS) software to create visual models, as well as data gathered from government agencies and real-estate property values. In the short term, they predict that a sea level rise (SLR) of...

“Decisions must be made in the near future by lawmakers or city planners on how to reduce the impact of and adapt to SLR,” the authors wrote. “A planned retreat is not an option when dealing with SLR in such an important area.” Instead, they suggest that the erection of a flood barrier as a short-term solution would buy some time to come up with a better long-term plan. “Cost-effective methods to deal with SLR should be developed, and long-term solutions that extend well into this millennium are necessary.”

The research is based on conservative models in which SLR increases in a straight line consistent with recent trends. But some models suggest that sea levels are rising faster than previously realized, so this study may underestimate the amount of flooding and damage that Washington, DC, will suffer in the next few decades.