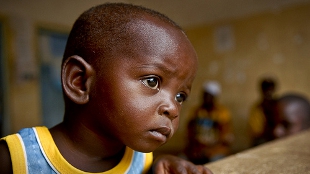 A boy waits with his mother for malaria test resultsFlickr, DVIDSHUBResults from a recent clinical trial testing the RTS,S malaria vaccine show that only a third of infants given the injection at 9 to 12 weeks of age were protected from the disease.  Although the study authors acknowledge the disappointing results, published last week (November 9) in the New England Journal of Medicine, they say that even a 30 percent reduction in the roughly 216 million cases of malaria could have a significant impact.

"The efficacy came back lower than we had hoped, but developing a vaccine against a parasite is a very hard thing to do," Bill Gates said in a statement.

The vaccine, developed by GlaxoSmithKline in collaboration with the PATH Malaria Vaccine Initiative, had shown better success rates in earlier studies on a smaller cohort of children in the same age group—65 percent—as well...

The authors contend that the results only represent a portion of the Phase III results, with the data reported from only two of the 11 trial sites. Full results aren’t expected until 2014.   "To jump to conclusions is a disservice to the public," David Kaslow, director of the PATH Malaria Vaccine Initiative, told Nature. "We've been at this for 30 years, and we're certainly not going to give up now," GSK Chief Executive Andrew Witty told reporters on a conference call.