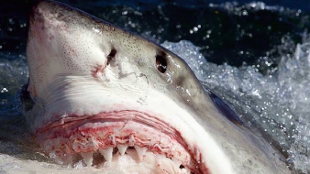 A 4.5 meter great white shark (Carcharodon carcharias) scavenges a whale carcass in False Bay, South Africa.PLOS ONE: doi:10.1371/journal.pone.0060797Has the Discovery Channel officially jumped the shark? Many critics are asking if the programmer is eschewing the role of educational science programmer for the allure of reality TV after the start of the annual “Shark Week.” And bona fide shark researchers are claiming that Discovery producers flat out lied to them about how their interviews would be used for programs that appeared during the weeklong shark programming bonanza.

On Sunday night (August 10), Discovery kicked off this year’s “Shark Week” by showing a fictitious shark story, “Shark of Darkness: Wrath of Submarine,” that was dressed up to look like a serious documentary. Although it contained brief on-screen warning about events depicted in the show being “dramatized,” the program failed to mention that the story, about a mythical...

“Everyone who has worked on white sharks has seen their version of the ‘Submarine,’ but it does not actually exist. Think Loch Ness,” she said. “I am a zoologist specialized in behavior and have just completed my [master’s degree] from the University of Cape Town studying the anti-predator tactics of Cape fur seals in Shark Alley, Geyser Rock, South Africa. Not once did I meet the researchers [in] ‘Shark of Darkness: Wrath of Submarine’ features, because they do not exist. They are actors.”

And now, two marine biologists are claiming that Discovery producers duped them into providing interviews that ended up in similarly sensationalist programs. One of the researchers, Jonathan Davis of the Texas Parks and Wildlife Department, was interviewed by Shark Week producers, who used the footage in “Voodoo Shark” about a legendary shark named “Rooken” that is said by some to stalk the bayous of Louisiana. “I asked a few of the crew members, including the producer, what the show was going to be about,” Davis told io9. “I never got a straight answer, and the producer seemed to avoid the question. I was just told it would be combined with some other filming to make one show about Louisiana shark research.”

Davis added that the producers spliced together his interview footage to make it seem as though he believed in the existence of the fictitious creature.

Shedd Aquarium postdoc Kristine Stump is making similar claims about the interviews she granted “Shark Week” film crews. Stump, who studies hammerhead sharks, was taped by Discovery Channel cameras for what she thought would be a serious documentary on the fish. “The basic premise was a camera crew was dropping in on real scientists doing actual hammerhead research,” Stump told io9. “We’d talk about the research goals and the challenges we face in trying to achieve those goals.” But her footage ended up in “Monster Hammerhead,” a program to be aired later this week on Discovery which apparently focuses on a mythical hammerhead that has supposedly been swimming Florida waters for 60 years (well beyond the animal’s documented lifespan). “‘Monster Hammerhead’ does not match the description of what we filmed," Stump said.