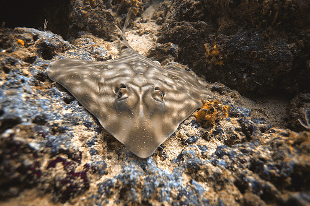 GuitarfishFLICKR, LASZLO ILYESIn the first global analysis of its kind, an international team of researchers found that of the 1,041 species of cartilaginous fishes (chondrichthyans) investigated, 25 species are critically endangered, 43 are endangered, 113 are vulnerable, and 132 species are “near threatened.” That’s a total of 30 percent of the species analyzed; for 487 of the remaining species, there was insufficient data to classify the threat.

“Overall chondrichthyan extinction risk is substantially higher than for most other vertebrates, and only one-third of species are considered safe,” the authors wrote in their report, published this week (January 21) in eLife.

“Our analysis shows that sharks and their relatives are facing an alarmingly elevated risk of extinction,” coauthor Nicholas Dulvy, a marine ecologist at Simon Fraser University in Burnaby, Canada, and cochair of the International Union for the Conservation of Nature (IUCN) Shark Specialist Group, said in a...

Dulvy and his coauthors point the finger at human fishing efforts, through which both deliberate and accidental targeting of these species has been a main driver of their threatened status, and “warn that dramatic changes in the enforcement and implementation of the conservation and management of threatened chondrichthyans are urgently needed to ensure a healthy future for these iconic fishes and the ecosystems they support.”

Interestingly, it is not sharks but rays, including sawfish, guitarfish, and stingrays, that appear to be the most threatened. “[T]hese are species that are for the most part overlooked by resource managers and conservation advocates, even though they, like sharks, may be just as vulnerable, heavily exploited, and in need of conservation action,” the Wildlife Conservation Society said in a statement. “Guitarfishes, for example, are highly valued for the shark fin trade, while manta and devil rays are targeted for their gill rakers, which, like shark fins, are traded primarily for Chinese markets.”