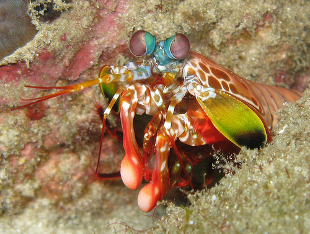 A species of mantis shrimp related to Haptosquilla trispinosaFLICKR, SILKE BARONThe eyes of mantis shrimp (Haptosquilla trispinosa) are impressive. Each eye, which sits atop a stalk that projects from the shrimp’s head, is able to perceive distance on its own through a process called trinocular vision, and can perceive circularly polarized light. And according to a study published this week (January 23) in Science, the crustaceans visualize colors very differently than all other animals.

With 12 different photoreceptors, including four that respond to wavelengths in the ultraviolet light spectrum, some researchers had suspected that mantis shrimp were better distinguishers of color than humans, with just three: red, green, and blue. To test this theory, marine neuroscientist Justin Marshall of the University of Queensland in Brisbane, Australia, and his colleagues trained shrimp to recognize each of 10 different colors in the visible light spectrum, then tested...

“With 12 receptors, you’d think that they can detect colours much better than any other animal,” Marshall told National Geographic’s Not Exactly Rocket Science. “Actually, they’re much worse.”

The reason for their poor performance, the researchers suggest, is that the animals perceive color in an entirely different way than humans. Rather than compute colors based on the activity of their suite of photoreceptors, as humans do—which should have allowed the shrimp to distinguish between wavelengths with a difference of just 1 nm to 5 nm, Nature reported—the animals may just be responding to the photoreceptor that is the most active, with each type of photoreceptor reacting to a specific color.

Regarding why the shrimp perceive color in this way, it may simply be a matter of limited brain power. “A mantis shrimp only has a fraction of our cortical processing power, yet it handles four times more input,” Nicholas Roberts from the University of Bristol told Not Exactly Rocket Science. “The non-comparative processing system they have evolved represents a novel solution for increasing data acquisition while minimizing any downstream processing overhead.”