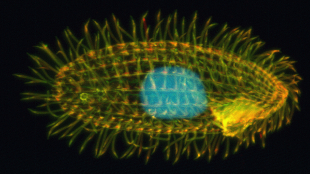 Tetrahymena thermophilaWIKIMEDIA, R ROBINSONWhen the protozoan Tetrahymena thermophila mates, its offspring can end up as any one of seven different mating types. Their fate is determined not by the mating types of the parents, but by a process of random genome rearrangement in which segments of DNA from the mating pair are whittled down until one of seven possible genes remains in the offspring, according to a study published this week (March 27) in PLOS Biology.

It was previously known that the mating type of the T. thermophila parents had no bearing on that of the offspring. To find out why, a team of biologists including Eduardo Orias of the University of California, Santa Barbara, took a closer look at the genetic mechanisms involved. T. thermophila have two nuclei: the somatic nucleus, which holds a genome that governs its own mating type, and the germline nucleus, which...

The genome in this germline nucleus contains incomplete genes for all seven mating types. The researchers found that these are combined with the mate’s collection of incomplete genes and passed to the newly formed somatic nucleus of the offspring. There, the DNA is shuffled and bits are deleted at random until there are only enough segments to make one complete gene, which determines the offspring’s mating type.

“You’re removing a link out of the system until you get down to the last link and you cannot remove any more,” Orias told Nature.