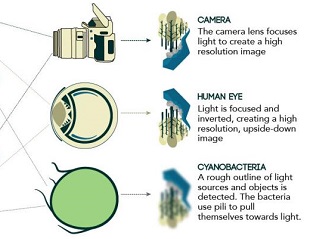 eLIFE (VIA EUREKALERT)A cyanobacterial cell acts like an eye, refracting light onto the cell membrane in a similar way to how the lens of a human eye refracts light onto the retina, according to a study published yesterday (February 9) in eLife. The findings contradict previous suggestions that the bacteria achieve phototaxis by sensing light gradients, and answer a question first asked by scientists more than three centuries ago.

“The fact that bacteria respond to light is one of the oldest scientific observations of their behaviour,” said study coauthor Conrad Mullineaux of Queen Mary University of London in a press release. “Our observation that bacteria are optical objects is pretty obvious with hindsight, but we never thought of it until we saw it. And no one else noticed it before either, despite the fact that scientists have been looking at bacteria under microscopes for the last...

Although previous studies had shown that cyanobacteria could use photoreceptors inside the cell to sense and move toward a light source, the precise mechanism of phototaxis was unknown until now.

Mullineaux and colleagues showed that a cyanobacterium, about half a billion times smaller than the human eye, refracts light onto the opposite side of the cell from the point of incidence. The focusing of light on photoreceptors in the cytoplasmic membrane then triggers the cyanobacterium to move in the opposite direction—i.e., toward the light source.

“We noticed it accidentally,” Mullineaux told BBC News. “We suddenly saw these focused bright spots and we thought, ‘bloody hell!’ Immediately, it was pretty obvious what was going on.”

Gáspár Jékely of the Max Planck Institute for Developmental Biology in Germany told BBC News that the study offered an “elegant demonstration” of the mechanism for phototaxis in these bacteria. “Cyanobacteria are 2.7 billion years old, so it’s much older than any animal eye,” he said. “Presumably, this mechanism has existed for a very long time.”