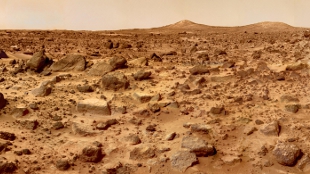 WIKIMEDIA, NASASimple carbon compounds have turned up in soil samples collected from the surface of Mars and analyzed by the NASA rover Curiosity, which is currently inching across the surface of the Red Planet on a mission to find traces of life. NASA scientists made the hotly anticipated announcement at the annual fall meeting of the American Geophysical Union in San Francisco yesterday (December 3).

Curiosity's onboard mass spectrometer detected chloromethanes—one carbon atom bonded to one, two, or three chlorine atoms in place of hydrogen. But without further testing, the NASA team that oversees the rover's work on Mars cannot determine whether the simple organic compounds came from the remains of amino acids—which would indicate the presence of organic life at some point in the planet’s history—or from residue from the types of polycyclic aromatic hydrocarbons commonly embedded in comets and asteroids. Alternatively, the findings could simply be artifacts...

"We just don't know if these [compounds] are indigenous to Mars, and it is going to take some time to work through," said mission chief scientist John Grotzinger of Caltech at the meeting.