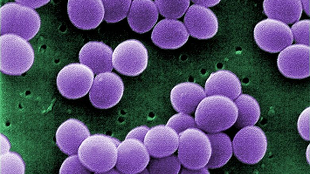 A scanning electron micrograph of vancomicyn-resistant Staphylococcus aureusWIKIMEDIA, CDCThe antimicrobial properties of silver have been known for thousands of years, but it was not clear how the metal wreaked havoc on pathogenic invaders. Now, researchers have explained the cellular processes by which the precious metal weakens bacteria and makes them more susceptible to antibiotics, according to a study published yesterday (June 19) in Science Translational Medicine. The findings suggest that silver could be used to enhance the effectiveness of antibiotics against drug-resistant bacteria.

A team lead by Jim Collins, a biomedical engineer at Boston University, showed that dissolved silver ions interfere with several cellular processes in bacteria, including disulfide-bond formation, iron homeostasis, and metabolism. These changes not only make the cell membrane more permeable, but also lead to increased production of reactive oxygen species, which can induce cell death via DNA damage. (Last month, a report from...

When Collins and his colleagues supplemented antibiotics with a small amount of silver, both in vitro and in a mouse model of a urinary tract infection, the combination killed up to 1,000 times more bacteria than the antibiotics did on their own. In addition, the researchers showed that silver sensitizes Gram-negative bacteria to vancomycin, a large-molecule antibiotic that usually can’t breach the outer coating on the bacterial cell membranes.

“This work shows that silver can be used to enhance the action of existing antibiotics against Gram-negative bacteria, thus strengthening the antibiotic arsenal for fighting bacterial infections,” the authors wrote.

Vance Fowler, an infectious disease physiologist at Duke University in North Carolina, told Nature that the study is “really cool” but warned that silver can be toxic. But Collins said that even with non-toxic doses of silver, his team observed enhanced antibiotic efficacy in mouse models of infection. Collins added that other researchers might now attempt to find non-toxic compounds that mimic silver’s bacteria-weakening mechanisms.