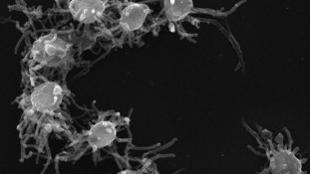 Capsaspora owczarzakiWIKIMEDIA, ARNAU SEBE-PEDROS & INAKI RUIZ-TRILLOResearchers studying an amoeba species have determined that some of its proteins bear a striking similarity to proteins in multicellular animals, suggesting that the leap from unicellularity to multicellularity may have been easier than previously suspected. The protist, Capsaspora owczarzaki, undergoes life-cycle transitions with the aid of phosphosignaling and proteome regulation in much the same way that multicellular animals direct the differentiation and role of cells performing different functions within an individual organism, the scientists reported last week (October 13) in Developmental Cell.

“Animals are regarded as this very special branch, as in, there had to be so many innovations to be an animal,” David Booth, a biologist at the University of California, Berkeley, who wasn’t involved in the study, told Science News. The new work shows “a lot of the machinery was there millions of years before animals...

Researchers in Spain combed the proteome of C.owczarzaki as the amoeba transitioned from free living to colonial stages of its life cycle. They found that the mix of proteins changed in these different life stages, especially with regard to phosphorylation state. The researchers also discovered key differences in transcription factors and tyrosine kinases, suggesting that the amoeba’s proteins were being modified just as proteins are in distinct cell types within the body of a multicelluar organism. This, study coauthor Iñaki Ruiz-Trillo of the Institute for Evolutionary Biology in Barcelona told Science News, means that the earliest multicellular animals were likely “recycling mechanisms that were already present before.”

Such molecular changes had not previously been documented, on the proteome level, in single-celled species. If the ancestor of early animals also harbored these molecular characteristics, the jump from unicellularity to multicellularity may have been more than a tweak to existing machinery rather than a huge structural and functional leap, Ruiz-Trillo and his team reasoned.