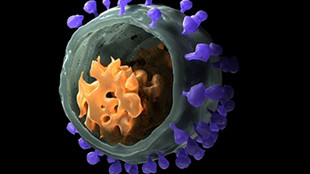 SIV virionNIH, SRIRAM SUBRAMANIAMA vaccine has eliminated simian immunodeficiency virus (SIV) in some rhesus macaques, which remained uninfected for as long as three years post-treatment, according to a study published in Nature yesterday (September 12).

Previously, researchers had shown that about half of rhesus macaques given the vaccine were protected from SIV infection. The new study showed that monkeys given the vaccine and then infected with SIV showed no signs of the virus in their systems even though it had originally taken hold.

“The virus got in, it infected some cells, moved about in various parts of the body, but it was subsequently cleared, so that by two or three years later the monkeys looked like normal monkeys,” study coauthor Louis Picker from Oregon Health and Science University told Gizmodo.

The vaccine contains a cytomegalovirus that expresses SIV proteins, stimulating the immune system to recognize and...

“It’s always tough to claim eradication—there could always be a cell which we didn't analyze that has the virus in it,” Picker told BBC. “But for the most part, with very stringent criteria . . . there was no virus left in the body of these monkeys.”