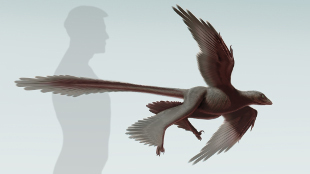 Changyuraptor was 1.2 meters (4 feet) in length and, at approximately nine pounds, was “by far the largest of the flying nonavian dinosaurs that lived about 125 million years ago,” The New York Times reported.

“Nine pounds for an early flier,” coauthor Luis Chiappe, a paleontologist with the Natural History Museum of Los Angeles County told the Times. “That is a pretty sizable beast.”