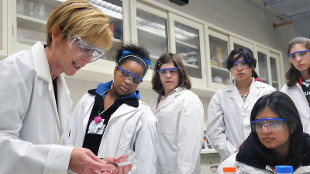 Wikimedia, Argonne National LaboratoryThe amount of total money spent on biomedical and health research fell by $4 billion, or 3 percent, between 2010 and 2011, mostly due to large budget cuts from federal sources, with a total budget of around $136 billion, according to the 2011 U.S. Investment in Health Research report, released by Research!America yesterday (October 25). Pending budget cuts as a result of sequestration threaten to knockdown research spending by up to another 10 percent—or $13.6 billion dollars—in 2013.

“Insufficient funding, coupled with deep budget cuts under sequestration, could be devastating for research,” Research!America’s chair John E. Porter said in a press release. “Our global competitiveness hinges on a robust investment that will support bright scientific minds, create high-quality jobs and provide a catalyst for private sector innovation.”

The report found that the federal government contributed $39.5 billion in research funding last year, down 14 percent...

In contrast, the report points out that China has pledged to invest $308.5 billion in biotechnology research over the next 5 years. “As R&D spending abroad outpaces federal investments here at home, US companies will set up shop in countries with stronger policies to support research,” Mary Woolley, president and CEO of Research!America, said in a press statement. “We cannot afford to become complacent as cures for Alzheimer’s, cancer, heart disease, and other serious health threats remain a priority for every American.”